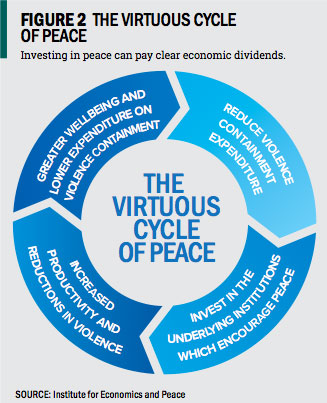 The U.S. has the highest cost of violence, averaging $5,485 per person

A new report from the Institute for Economics and Peace (IEP) has just been released on the economic impact of violence containment to the world economy.

One of the many harrowing statistics: the 2012 estimated global cost was $9.46 trillion or 11 percent of Gross World Product, which is more than 75 times our foreign aid expenditures. The United States violence costs constitute 10.5% of our GDP. Sadly, these numbers are conservative estimates.

IEP defines violence containment spending as economic activity that is related to the consequences or prevention of violence where the violence is directed against people or property.

And The Countries that Spend The Most…

The countries with the biggest costs of violence containment in absolute terms were found to be the United States, China and Russia, accounting for almost half of the world’s violence containment costs. This is despite these countries only accounting for 26 percent of the world’s population. In all three cases the majority of these costs were from military expenditure. Specifically, in the United States, approximately 70 percent was found to be military expenditure.

The old idea of war being good for the economy has been throughly debunked and the economic benefits of encouraging peace are increasingly being recognized.

If violence containment spending was reduced by 15% the world would save $1.4 trillion and it would be enough to provide:

We clearly have work to do. We will keep it up on our end; please continue to join us in peace actions. We’ll get there.