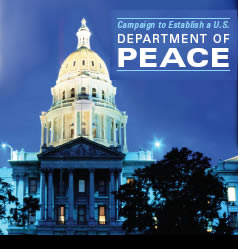 House bill HR 808 to create a federal Department of Peacebuilding (DoP) is comprehensive, cost-effective, evidence-based and transformative legislation designed to build a culture of peace by reducing violence at all levels of society. It prescribes developing various strata of peacebuilding structure proven conducive to the nonviolent resolution of conflict. The “peace” humanity has forever craved may be possible at long last if nonviolence becomes an overarching operational organizing societal principle (what DoP is all about).

Culture of peace as stated in the precedent-setting United Nations Declaration and Programme of Action on a Culture of Peace (A/RES/53/243) 1 is a set of values, attitudes, modes of behavior and ways of life that reject violence and prevent conflicts by tackling their root causes to solve problems through dialogue and negotiation among individuals, groups and nations. Culture of peace is a relatively new idea in the progression of human consciousness. Being familiar with the concepthelps one to appreciate DoP’s significance because the legislation embodies that evolutionary idea. As reflected in HR 808, the term culture of peace succinctly conveys the multidimensional nature of “building peace” and that effective concrete nonviolence strategies exist in the newly recognized social science discipline of Peace and Conflict Studies.

When the UN was created in 1945 as the highest world peace authority, it was an historic leap in human consciousness. But the rigorous field of Conflict Studies had not materialized yet so the UN could not mandate specific instruction on actually how to achieve peace. That did not happen until the monumental Culture of Peace Resolution was passed in 1999 by General Assembly consensus. It established for the first time in human history (through an integral approach to preventing violence) certain inter-related universal normative standards for actions that must happen to build a culture of peace in eight (8) key Action Areas: 1) education 2) economic & social development 3) human rights 4) gender equality 5) democratic participation 6) understanding & tolerance 7) free flow of information and 8) international security. Intentional actions taken in each and every one of these areas by all world actors (everyone) will build the culture of peace because they are based on knowledge gleaned from Peace and Conflict Studies principles.

Article 5 of the Culture of Peace Declaration states governments have an essential role in promoting and strengthening a culture of peace, which chronicles why DoP is important. Since government was created by humankind to improve people’s lives, peacebuilding ought to be one of its fundamental duties! The U.S Declaration of Independence says that life, liberty and the pursuit of happiness (ie. peace) are inalienable rights for which governments are instituted among men (and women) to secure. The U.S. Constitution was established in order to form a more perfect union, establish justice, insure domestic tranquility, provide for the common defense, promote the general welfare, and secure the blessings of liberty to ourselves and our posterity. These nebulous human elements can be summed up by one word — “peace.” Thus, the paramount responsibility of government is to secure our birthright to live in peace. And if the costly, lethal levels of violence that exist today are any indicator of how effective government has been in fulfilling this basic obligation, clearly the need for a primary, purposeful “peacebuilding” focus has never been more urgent. Violence is at epic proportions. It is a top public health and safety issue as well as an enormous economic problem. Our unalienable right to life, liberty and the pursuit of happiness is threatened daily in harmful, destructive ways by the violence perpetrated at all levels. Multidimensional infrastructures that support and enhance the nonviolent resolution of conflict are desperately needed to alter our alarmingly violent trajectory. As Martin Luther King, Jr. once said so long ago – “it is nonviolence or nonexistence.”

The UNESCO Constitution states: “Since war begins within the minds of men (and women), it is in the minds of men that the defences of peace must be constructed.” The culture of violence we live in is an all-systems problem which calls for an all-systems solution. It starts with addressing the innate violence we hold within our minds and translates to our inner and interpersonal relations, communities, nations and the earth itself. Peace expert James O’Dea says “peace links the inner life and the whole web of life with its requirements for sustainability and equity on a global scale. Peace is so large and encompassing because it brings together inner security and global security.” 2 The Earth Charter says it best when it defines peace as the “wholeness created by right relationship with oneself, other persons, other cultures, other life, earth and the larger whole of which we all are a part.” Obviously “peace” (as history has shown) is a very big order and will take the concerted political willpower of a massive “heavy-lift” in order to happen.

The DoP comprehensively formulates our government’s role in “heavy-lifting” a culture of peace via all the Earth Charter levels of right relationship. By design, its multidimensionality shows how a U.S. Department of Peacebuilding would operate. It reflects an epic shift in awareness based on facts we now know about what it takes to build a nonviolent world. This makes it transformational. Simon Fisher and Lada Zimina 3 talk of two approaches to “peacebuilding” – technical and transformative. The technical approach is to end a specific situation or open conflict (negative peace) while the transformative approach, in addition is to influence the underlying structure and culture as an integrated element in building something better (positive peace). Ironically, these two approaches often are in conflict or juxtaposition with one another, each believing theirs best, when in fact BOTH are needed and most effective when working together. For transformational change, peacebuilding must focus on the entire system, inclusive of the various “piece” components because they are all interconnected. DoP is a systems approach, not as much about adding another layer of bureaucracy as about efficient organization, coordination and synthesis of the technical “peace” functions already obscurely existing “piecemeal” throughout the various arms of government — defining and systematically raising their importance, while providing much needed conflict resolution within government as well. Creating a federal department whose singular purpose is for the pursuit and cultivation of “peace” enhances the intention, determination, capacity, commitment and thus the possibility and likelihood for the culture of peace to emerge.

The growing trend for departments and ministries of peace is already operational in other parts of the world. Four countries have such ministries within their governments (Costa Rica, Nepal, Papua New Guinea and the Solomon Islands). There is a rapidly spreading movement of governmental and nongovernmental civil society representatives alike from over 50 countries advocating for them, known as the Global Alliance for Ministries and Infrastructures for Peace (www.gamip.org) 4 in existence almost 10 years now. In addition, an NGO group at the UN, known as the Global Movement for the Culture of Peace (www.gmcop.org) 5 promotes international connection and collaboration around the Programme of Action on a Culture of Peace and for well over the last 10 years has been documenting — through Culture of Peace World Reports and the Culture of Peace News Network6 — the reality of an inspiring, worldview-altering, successful, ever-expanding, global movement for the culture of peace. (http://decade-culture-of-peace.org/ and http://cpnn-world.org/index.php).

Peacebuilding is essential and complex. It must take place simultaneously on all societal levels to shift from a culture of violence to a culture of peace. DoP legislation is important because it is comprehensive, cost-effective, evidence-based, transformative legislation aligned with the discipline of Peace and Conflict Studies and the United Nations Declaration and Programme of Action on a Culture of Peace. Enacting it would show the U.S. to be a world leader in peacebuilding and provide a solid model for the growing culture of peace / department of peace movement. A cabinet-level Department of Peacebuilding would enable our government to more effectively fulfill its basic Constitutional duty by giving vital institutional heft to ensure “peacebuilding” becomes a national priority focus. Utilizing the power of the federal government to facilitate peacebuilding infrastructure would enhance our collective capacity to respond to conflict in nonviolent ways. The naysayers balk that DoP is too visionary to ever be real. Yet the evolution of human consciousness shows that what we focus on does in fact become real. A DoP could do much to reduce violence, thus making us safer and more secure. As we approach the abyss, now is the time to avert and transform our culture of violence by instituting a comprehensive life-saving and cost-effective United States Department of Peacebuilding.

Become a Sponsoring Member of The Peace Alliance
Scroll to top