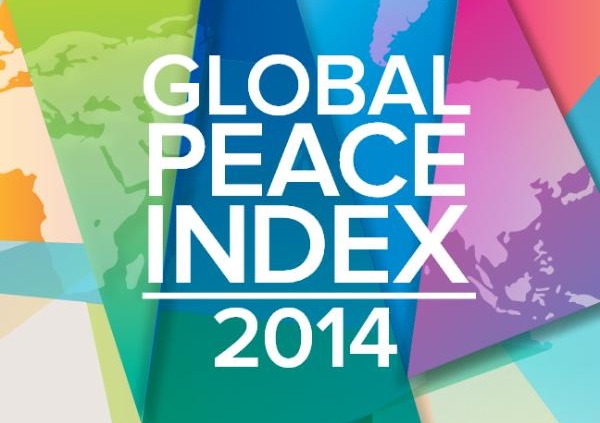 [First_Name], last week the Institute of Economics and Peace (IEP) released the 2014 edition of its annual Global Peace Index (GPI), which “ranks nations according to their level of peace.”

The GPI measures the “absence of violence and absence of the fear of violence” using socio-economic and statistical indicators of interior and exterior conflict as well as the degree of social security and militarization. The GPI also introduced a method of assessing country risk, which compares a few metrics of peace and violence to assess how likely those nations are to improve or deteriorate in peacefulness in the future.

The world has become less peaceful every year since 2008, highlighting the importance of better understanding conflict and violence risk and greater investment in peacebuilding.

Steve Killelea, the founder and executive chairman of the Institute for Economics, described the sums spent on the impacts of violence as staggering.

“This is resulting in very real costs to the world economy; increases in the global economic impact of violence and its containment are equivalent to 19% of global economic growth from 2012 to 2013,” he said. “To put this in perspective, this is around $1,350 per person.”

However, said Killelea, the true costs could be twice as high as some data cannot be obtained. “We can only count what we can count.”

Together, these reports provide us with a comprehensive picture of global peace and the quickly changing nature of peacefulness throughout the world.

The United States is ranked 101st in the GPI, a drop of three places from last year, largely due to an increase in terrorist activity, connected to the Boston-Marathon attack.

2014 saw overall improvements in societal safety and security and reductions in the incarcerated population, but these positive results were accompanied by a deterioration in the level of violent crime.

Overall, the world continues to grow somewhat less peaceful, primarily driven by “tensions in Ukraine, the ongoing conflict in Syria, civil war in South Sudan and a broadening and increased intensity of terrorist activity in many countries including Afghanistan, Iraq, the Philippines and Libya.”  Five geographical regions became more peaceful, and among the four that did not, only sub-Saharan Africa and the Middle East and North Africa saw important changes in the Index.  Europe remains the most peaceful region and South Asia remains the world’s least peaceful region, although South Asia saw a large improvement in peace.

The IEP Risk assessment determines the potential for countries to become less peaceful based on the interconnectivity between violence and societal dynamics.  The risk assessment attempts to provide a new framework for evaluating fragility, allowing policymakers and stakeholders an opportunity to build resiliency and strengthen the frameworks for stable and peaceful societies.

According to this assessment the ten countries most likely to drop in peacefulness in the next two years are Zambia, Haiti, Argentina, Chad, Bosnia and Herzegovina, Nepal, Burundi, Georgia, Liberia and Qatar.  They also found that over 500 million people live in countries which have a high chance of a drop in peace over the next two years.  The Institute of Economics and Peace warns, “of those 500 million people at risk, around 200 million live on less than $2 per day, making them highly vulnerable if deteriorations in peace do occur.”  Using past data to test their model, the IEP found that out of the 30 countries identified as ‘at risk’ with 2008 data, only three had not deteriorated in peace by 2014.

The Big Picture: Why Lobbying for Legislation to Create a Department of Peacebuilding...
Scroll to top