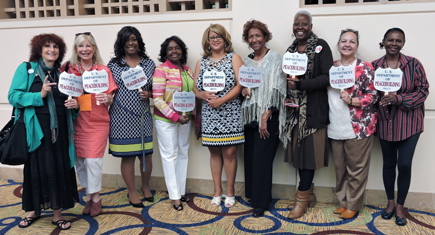 “This is one of the most important testimonies I have ever given,” said Captain Shawn Terris after urging the California Democratic Party (CDP) Legislation Committee to endorse the 2015 Department of Peacebuilding Act (DoP/ HR1111), sponsored by Congresswoman Barbara Lee’s (CA-13).

On August 16, 2015, at its statewide Executive Board meeting, the CDP endorsed the 2015 U.S. Department of Peacebuilding (DoP/ HR1111) legislation and adopted a “Resolution Urging the United Nations and All Member States to Support Infrastructures for Peacebuilding Within and Among Nations.”  The CA Peace Alliance/ Department of Peacebuilding Campaign submitted both items for CDP consideration. Attendees also signed over 500 letters asking members of Congress to cosponsor HR1111.  And, we made many valuable connections, including with Congresswoman Maxine Waters (CA-43), who co-sponsored DoP legislation four days after the Executive Board meeting in Burlingame, CA. 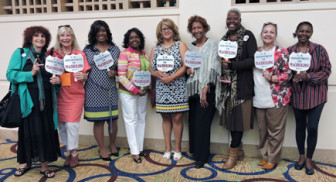 OVERVIEW OF THE CDP EXECUTIVE BOARD MEETING

Equality, inclusion, and violence prevention — key components of peacebuilding — were prominent themes at the CDP Executive Board meeting. Creating a cabinet-level U.S. Department of Peacebuilding will address root cause of violence and conflict and will make violence prevention a national priority. The United States incarcerates 2.3 million individuals, including a disproportionate number of people of color. One in 3 American women is a victim of domestic violence. Children are subjected to bullying at alarming rates. Twenty-two American veterans commit suicide every day. Thousands and thousands in this world are refugees from war and violence in their countries.

During her testimony, Captain Terris said, “The Veterans Caucus unanimously supports the Department of Peacebuilding Act. As veterans, we have a unique perspective because the President of the United States only calls on us to go to war when he and Congress want to “resolve” conflict. We believe our country is way too quick to address conflict or violence with more violence and more conflict. This is America’s culture. It’s the way we think. We need to change that. We need to change the way we think about conflict and resolve it.” 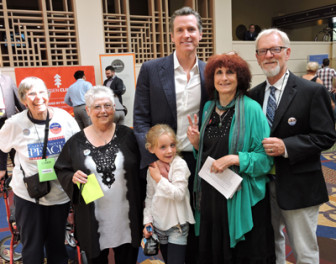 priority to resolving conflict without using force and without causing more violence and conflict. Wouldn’t that be great if our legislators thought first of asking the Department of Peacebuilding to reduce conflict and violence instead of the Department of Defense? Do we really want to continue to militarize our police departments across the U.S. to resolve violence? Because we have proven that doesn’t work. Why don’t we try something else? Let’s try Peacebuilding!”

The CDP endorsed the DoP legislation and adopted the resolution after CDP Chair John Burton paid tribute to Julian Bond, for his many years of work on civil rights, peace, justice and equality issues. Burton said Bond was always there — he always supported the many struggles to make this a better world. Bond, who passed away while the Executive Board met, helped start the Student Nonviolent Coordinating Committee in 1960, served in the Georgia House and the Georgia Senate, and was Chairman of the NAACP for ten years. Morris Dees, co-founder of the Southern Poverty Law Center said the nation had lost one of its most passionate voices for justice. “He advocated not just for African Americans, but for every group, indeed every person subject to oppression and discrimination, because he recognized the common humanity in us all.”

In 2013, the CDP, as a statewide party, endorsed DoP 2013 legislation. With the new 114th Congress the slate was wiped clean. New Congress. New bills. New legislation requests to the CDP. Renewed efforts to build CDP support for a DoP. Congresswoman Barbara Lee re-introduced legislation to create a cabinet-level Department of Peacebuilding on February 26, 2015. DoP supporters have been and continue to lobby members of Congress to cosponsor HR1111 and are building support among other groups and organizations, including the CDP.

CDP endorsement of the 2015 DoP legislation, and the related resolution, is a story of determination, cooperation and collaboration to make peacebuilding a national priority. Kudos to CA Peace Alliance and CDP supporters of DoP legislation and to those who are working to make ours a more peaceful world.

BUILDING SUPPORT – OUR ROAD TO THE EXECUTIVE BOARD MEETING 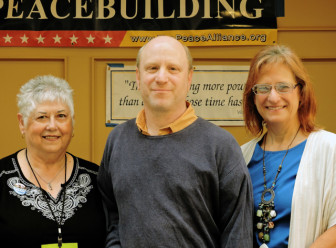 Leading up to the Executive Board meeting, the CA Peace Alliance Democratic Endorsement team, others from the CA Peace Alliance and allies in the CDP covered the state, by email/ phone calls and/or by attending meetings to seek support and endorsements from CDP clubs, the 58 CA county central committees (DCCs), the 21 CDP regions and others, including the San Fernando Valley Democrats and the CDP Veterans Caucus.

By the time of the Executive Board meeting, DoP supporters/ endorsers included at least 12 regions, 14 DCCs, 19 clubs, the Democratic Party of San Fernando Valley, the CDP Veterans Caucus, and many individual Democratic Party delegates and office holders. The 25-member CDP Legislation Committee from all parts of the state unanimously endorsed DoP 2015. Others have supported since the Executive Board meeting. For a detailed list, see the Endorser/ Supporter Sidebar.

LEGISLATION COMMITTEE – DoP and Other Legislation

Prior to the final CDP vote on its endorsed legislation, the Legislation Committee makes recommendations on state legislation and on a handful of federal bills. Going in to the Legislative Committee hearing on 8/15/15, DoP had broad support. Darren Parker (Chair of the CDP African 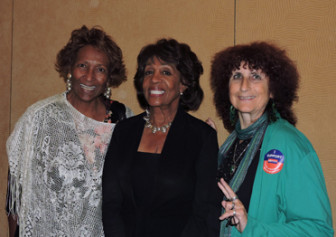 American Caucus), Captain Shawn Terris (Chair of the CDP Veterans Caucus), and others were ready to testify in support of the DoP legislation.

As it is became apparent the Legislation Committee would recommend DoP endorsement, the Committee asked us to limit testimony to one individual. Captain Terris spoke eloquently on behalf of the CA Peace Alliance and the many supporting CDP regions, DCCs, clubs and individuals. Margie Joehnck, a long-time supporter and representative from the Nevada County DCC, attended the hearing, as did CA Peace Alliance volunteers Nancy Merritt, Jerilyn Stapleton and Stephanie Thomas.

The most controversial issue in both the Legislation Committee hearing and in the general session was End of Life legislation (SB128 Wolk), relating to making California a “right to die in dignity” state, similar to Oregon law, where this has been a right for 20 years. There was heartfelt testimony on both sides of this issue. The Party endorsed.

The CDP adopted a number of resolutions, including our UN peacebuilding resolution and a ‘Black Lives Matter’ resolution.

California Resolution. The CDP adopted the CA Department of Peacebuilding ‘Resolution Urging The United Nations and All Member States To Support Infrastructures For Peacebuilding Within and Externally Among Nations,’ which provides:

WHEREAS the California Democratic Party supports the creation of a Department of Peacebuilding, and adopted language to the 2014 Party Platform to “actively promote national institutions based on the organizing principles of violence prevention and nonviolent conflict resolution, utilizing and developing a network of ‘best practice’ peacebuilding policies and programs both within United Nation member states and externally among nations”; and

WHEREAS delegates from civil society, governments and UN institutions and agencies from more than 50 countries of the Global Alliance for Ministries and Infrastructures for Peace (GAMIP), which include Australia, Brazil, Canada, Japan, New Zealand, the USA, and many countries within Africa, Asia, Europe, and the Middle East, who since 2007, have a United Nation’s liaison working with NGOs to create a United Nations global resolution to urge the establishment of infrastructures for peace within the governments of the 196 United Nations Member States; and

WHEREAS nations within the GAMIP coalition have already begun to institute government networks of peacebuilding practices which will address conflicts at home and abroad saving lives and money, such as Nepal’s 2007 Department of Peace and Reconstruction, Costa Rica’s 2009 Department of Justice and Peace, and the Canadian Liberal Party, which adopted a resolution in their 2014 Party Platform to establish a government institution dedicated to promote a culture of peace, with a mandate that includes the creation of a permanent Canadian Civilian Service of professionally trained men and women, to work toward violence prevention, peace education and nonviolent conflict resolution at every level of society.

THEREFORE BE IT RESOLVED that the California Democratic Party urges the United Nations and all Member States to promote and support the establishment of peacebuilding infrastructures in order to facilitate the gathering and creation of best practices and policies, improving communication, cooperation and collaboration to save future generations from the atrocities of violent conflict, poverty and human-induced environmental disasters, advanced by passage of the global resolution; and

GAMIP Resolution. This CA resolution was inspired by an action urging the United Nations General Assembly to pass a resolution for “Establishment of Infrastructures to Support a Culture of Peace” in all nations, which is posted at PeaceNow.Com by its co-founders Scotty Bruer and John Viscount. The online petition evolved from ideas that have been brewing over many years and related actions, including: 1) work at the United Nations, its 1998 UN Resolution for a Culture of Peace and the 1999 UNESCO Resolution for a Decade of Peace and Nonviolence for the Children of the World; 2) collaborations at various summits over the years of the Global Alliance for Ministries and Infrastructures of Peace (GAMIP); and 3) a connection between John Viscount (www.peacenow.com) and some in the GAMIP / National Peace Academy / Peace Alliance community such as Mike Abkin, Anne Creter, Maggi Koren, Dot Maver. That connection with John began when his film Admissions premiered at the 2011 GAMIP summit in Cape Town, South Africa.  To sign the petition and watch Admissions, go to www.PeaceNow.com.

Other adopted resolutions included “Resolution in Support of the ‘Black Lives Matter’ Movement,” which provided, in part:

WHEREAS, the California Democratic Party upholds the ideals of equal justice under the law, racial justice, police accountability, and human dignity for all people … the recent killings and deaths (while in police custody) of unarmed Black men, women and children … are indicative of a growing racial division that threatens the current and future well-being of our country; and

WHEREAS, there is a “widening gap of trust” between law enforcement and the African American community; and closing this “widening gap of trust” requires that we address the underlying inequities that continue to divide people in this country along racial lines … we believe that the institutional racism in American society undermines the realization of the concepts of racial justice and equal justice under the law; that the problems still exist; and that improvements are needed in order to protect lives;

THEREFORE BE IT RESOLVED, the California Democratic Party supports the Black Lives Matter movement, community meetings, and peaceful demonstrations … calls for the creation and dissemination of a national model for community policing, well-funded and thoughtful programs that will provide marginalized young people access to academic and career programs, and an end to institutionalized racism …”

At our booth, we talked with people about peacebuilding and distributed literature and “Department of Peacebuilding” fans. We also collected over 500 letters to various members of Congress urging them to cosponsor DoP legislation. During this Executive Board meeting, we focused on three Northern CA and three Southern CA members of Congress: Anna Eshoo (CA-18), Ted Lieu (CA-33), Adam Schiff (CA-28), Jackie Speier (CA-14), Eric Swalwell (CA-15) and Mark Takano (CA-41). Many of our region, DCC, club, caucus and Legislation Committee supporters also came by our booth to sign these letters.

Since our booth was located between the booths of two candidates who are vying for retiring Senator Barbara Boxer’s seat – CA Attorney General Kamala Harris and Congresswoman Loretta Sanchez – we offered, should it be necessary, to work on building peace between the two.

We also talked about peacebuilding with members of Congress, state officials and staffers, including:

Thank you to the many CA DoP supporters who donated time, energy and money toward our successes at the CDP Executive Board meeting:

A Special Message from Heart Phoenix

Pope Francis’ call for peace. Is anyone listening?
Scroll to top