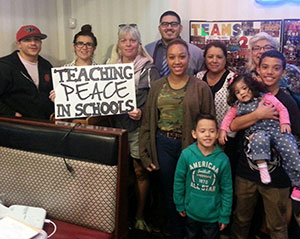 We are excited to be re-instituting our Peace Alliance newsletter to keep you better up to date with all the peacebuilding news on which we’ve been working. And, there’s lots of good news to share. Some key highlights below.

Also, keep checking our emails this coming month, as we will have some big announcements to share including the launch of an initiative we believe will help significantly propel the work of peacebuilding forward in our culture.

Peacebuilding victory in House of Representatives:

This past week, The Peace Alliance worked with Rep. Steve Cohen and other partners to help pass an amendment to HR 5, the Student Success Act, the primary Federal legislation affecting education. The amendment would allow Teacher Training and Development funds to be used to train key personnel on restorative justice and conflict resolution in schools!

Meaningfully, during debate on the House Floor, Rep. Cohen, the amendment’s sponsor, noted the Peace Alliance as a leader in supporting what could become one of the first Restorative Justice related provisions in Federal law should it ultimately pass the full Congress. As such, it is now a part of the Congressional Record. HR5 was put on hold by the House Majority pending further debate. See the short C-SPAN video of the amendments hearing on House floor.

It should be noted that we have concerns about the greater act in general, though it is a core funding measure that will likely be passed in some form. As such, we are not necessarily advocating for its passage, nor are we advocating for measures within it other than this amendment. Nevertheless, we feel it’s important that Restorative Justice is gaining a hearing at the Federal level.

We are very excited to announce our first conference in several years, coming up this Oct. 16th – 20th in our Nation’s Capitol.  Much more detail will be shared in the coming weeks and months. Please mark your calendars and save the date!  These have been incredibly inspiring events in past years, and are an opportune way to make your voice heard for peace in the Halls of Congress.

We are currently in discussions with staff from Rep. Bobby Scott’s and Senate offices to plan the reintroduction of the Youth PROMISE Act this session. Our leadership team with several other advocacy groups has begun to plan our strategic approach for the 114th Congress.

Meanwhile, bipartisan talk of Criminal Justice Reform has been gaining steam on the Hill, with events featuring liberals like Cory Booker and conservatives like Newt Gingrich appearing together to talk about the necessity of reforming the system. Even the Koch brothers have been represented. With support for the issue coming from all sorts of unexpected places, this could be YPA’s year!  Sign YPA petition here.

Report from the field:

On Valentine’s Day Congressman Bobby Scott was our Monthly National Action Call guest (listen to audio). Our field’s conversation with him was informative and inspiring, and will strengthen our call for the Youth PROMISE Act and meaningful juvenile justice reforms. Dan Kahn, our National Field Director, is on the road right now offering Action Team Launch and ReLaunch workshops in Texas, Arizona, California, Seattle, Chicago, Indiana, and Michigan.  Please drop Dan a line if you’d like to help launch a new team in your town! [email protected] Learn more about our Action Teams here.

The Student Peace Alliance is currently developing our Fall campaigns, with specific focus on efforts to “Ban the Box.” This campaign will be aimed at reducing recidivism rates for people with previous convictions by ensuring that they have a fair chance at employment and education once released from prison. We are also developing a new “buddy system” for our student chapters to create opportunities for resource sharing, collaboration, and community building between schools! Keep up to date on Student Peace Alliance here.

Restorative Justice on the Rise:

The Peace Alliance continues to co-sponsor Restorative Justice on The Rise, one of our nation’s only independent media platforms focused on justice, dialogue, and solutions. Recent podcasts include Van Jones of the #Cut50 initiative and Michael Gilbert, Executive Director of the NACRJ (National Association of Communities and Restorative Justice), the official convening organization here in the U.S. specific to RJ Practices.

We are also proud to announce that our new website at www.restorativejusticeontherise.org features audio archives from RJ on Rise, a National Resource Map, listing Restorative Justice and related organizations state-by-state. Our grassroots work also includes an official partnership with the NACRJ on Legislative Advocacy and we are active in MA, CO, WA, and other states supporting further systems implementation and legislative progress. In other news we have also brought on a Senior Restorative Justice Advisor, Dr. Sandra Pavelka, who has a long-term depth of experience in the field.

We continue to work with key policy partner organizations and coalitions in DC.  As part of the steering committee of the National Juvenile Justice and Delinquency Prevention Coalition (NJJDPC), we’ve been helping to formulate the congressional recommendations for the 114th congress.

We remain an active member of the Prevention and Protection Working Group (PPWG), which is a a coalition of human rights, religious, humanitarian, anti-genocide, and peace organizations. We’ve been most recently working on support for key international peacebuilding funding in the 2016 federal budget. See background and petition to Congress here.

We recently submitted written testimony to the Colson Task Force, which is a bipartisan blue ribbon panel Congress created last year to examine federal corrections policy and issue recommendations on how to fix the prison system. The task force has taking a very broad view of that mandate, examining the impact of incarceration on individuals, communities, and governments, how to make prisons more humane, reduce recidivism, and how to reduce the number of people we incarcerate. You can read our testimony here.

Recently, I appeared on the Peace and Social Justice Program on KZFR Radio in the Sacramento, CA area. The program was live streamed allowing listeners from around the country to listen in.  I answered queries from the show’s hosts, Stephen and Susan Tchudi, regarding The Peace Alliance’s history, its mission, and its priorities including Youth PROMISE Act, Faces of Peace, Restorative Justice, and the Department of Peacebuilding.

Five years ago Peace Alliance members in Sonoma County, CA, invited other peacebuilding groups to work on a joint project. Since then that coalition has hosted an annual kick-off for the Sonoma County Season for Nonviolence, which combines education about nonviolence practices with opportunities to learn more about local peacebuilding groups and initiatives and they’ve had some other fun successes. This year, leaders Kendra Mon and Maggie Koren were chosen to receive the Community Organization Award to the Peace Alliance and Season for Nonviolence from the Peace & Justice Center of Sonoma County. Read a more full report here about all the great work they’ve been doing.

We appreciate all your support as we continue to move forward.