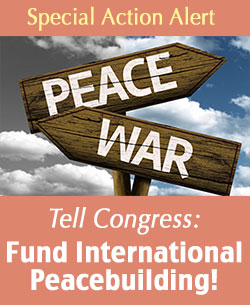 Right now, Committees in the House and Senate are drafting the State Department and Foreign Operations Appropriations Bills, and this year, because of how Congress has scheduled votes, there will be virtually no opportunities for amendments. That means that we have to act right now to make sure important Peacebuilding programs will be fully funded in 2015.

Your voice matters. When Representatives and Senators get even a few messages about programs like these, they take note. Hearing their constituents say that peacebuilding is important will convince them in a  way no defense industry lobbyist ever could. But you have to let them know that peace is important to you.

✔ Complex Crises Fund:
For 2015, we’re asking for $100 million for the Complex Crises Fund. The Complex Crises Fund (CCF) provides unprogrammed money for the State Department and USAID to ‘prevent and respond to unforeseen crises’. In just a few short years, it has become one of the most highly demanded tools in the US foreign policy toolkit, allowing the State Department and USAID to make rapid investments in prevention, stabilization, and crisis response. In 2014, funds from the CCF have been used for conflict mitigation between refugees and hosts in Jordan, and community peacebuilding in the Central African Republic. Urge Congress to increase the CCF to $100 million.

✔ United States Institute of Peace:
We would also like to see Congress fully fund the President’s Budget Request for the United States Institute of Peace of $41 million. The US Institute of Peace does training and research on Peacebuilding that no one else in the US Government does. USIP routinely engages with communities on the ground in conflicts around the world, trying to build stronger societies and find more peaceful paths forward. Tell Congress to fufill the President’s Budget Request and increase funding for USIP to $41 million.

These, and numerous other important peacebuilding efforts, risk losing funding if you don’t act.