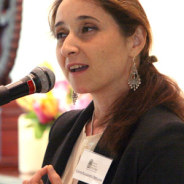 With the United States once again militarily engaged in Iraq and now also Syria, many are deeply concerned about our path forward.

We were pleased to be joined by Dr. S. Ayse Kadayifci-Orellana, Interim Associate Director and Visiting Assistant Professor in the field of Peace and Conflict Resolution at Georgetown University’s MA program in Conflict Resolution.

We talked about the growing threat and challenges posed by groups like ISIS/ISIL as well as many other global hot-spots — looking specifically at what a more multidimensional and holistic peacebuilding approach can contribute.

The call was on Saturday, October 11th.

We joined Dr. Kadayifci-Orellana for an important conversation and Q&A during the first half of the call, followed by a discussion of this month’s collective action — focusing on promoting peacebuilding as a more viable approach to the challenges we presently face. We also heard inspiring reports about victories our Action Teams from around the country have achieved.

She is also one of the founding members where she served as the Associate Director at Salam Institute for Peace and Justice, a non-profit organization for research, education, and practice on issues related to conflict resolution, nonviolence, and development (2005-2012). She received her PhD from American University’s School of International Service in Washington DC in 2002 with a Master’s degree in Conflict Analysis from University of Kent in Canterbury, England.

Dr Kadayifci-Orellana has taught, lectured and published extensively in the fields of  “Peacebuilding and Development,” “Evaluation of Peacebuilding and Development Programs” “Conflict Resolution and Peacebuilding in Muslim Communities”, “Gender and Peacebuilding in Muslim Communities”, “Religion and Peacebuilding,” “Cross-cultural Conflict Resolution and Mediation”, “Interfaith and Intra-faith Dialogues” among others. As a scholar-practitioner, Dr. Kadayifci-Orellana has also facilitated dialogues and training workshops, and worked on conflict resolution curriculum development in various countries including Turkey, Israel, Palestinian Territories, Iraq, Chad, Niger, Kenya, Guatemala, Iran, Saudi Arabia, among others.

Dr. Kadayifci-Orellana’s has authored “Standing On an Isthmus: Islamic Narratives of War and Peace in the Palestinian Territories” and co-authored the edited the volume, “Anthology on Islam and Peace and Conflict Resolution in Islam: Precept and Practice.”

Tell Congress that Second Chances Matter to You!
Scroll to top