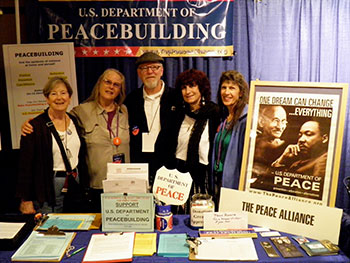 The California Democratic Party (CDP) adopted language by the California Peace Alliance calling for promotion of national institutions “based on the organizing principles of violence prevention and nonviolent conflict resolution, utilizing and developing a network of ‘best practice’ peacebuilding policies and programs, both within UN member states, and externally among nations.”

We took our message of peacebuilding to the recent CDP convention in Los Angeles (March 7-9, 2014) and succeeded in getting new peacebuilding language into the 2014 CDP Platform, and in retaining most of our 2012 CDP Platform language.

We also collected letters to almost all of California’s Congressional delegation — to 51 of 53 CA Representatives — urging them to cosponsor Department of Peacebuilding legislation (DoP/ HR808), which was introduced by Congresswoman Barbara Lee (CA-13) in February 2013.  The letters generated interest in the “building” aspect of the Department of Peacebuilding.  Letter writers included three generations from one Southern CA family.

Amidst the chorus of causes, concerns and candidates, we connected with current and potential public servants and with convention delegates and attendees about the DoP legislation, the Youth PROMISE Act (HR1318, S1307), restorative practices and peacebuilding in general.  We advocated that violence prevention is the right thing; it saves lives and money; and is more efficient and cost-effective than dealing with harm after conflict erupts into violence.  Our display, our message, our volunteers were compelling enough that one delegate called a friend who was at work and told her to brave the Los Angeles traffic to visit our booth.  She did that and she wrote a letter to her member of Congress.

Congresswoman Barbara Lee (CA-13) stopped by our convention booth, thanked us for our peace work, and advocated for members of Congress to cosponsor the Department of Peacebuilding bill (see video). We interacted with many other members of Congress including Ami Bera (CA-07),  Alan Grayson (FL-09), Mike Honda (CA-17), Scott Peters (CA-52), Raul Ruiz (CA-36), Maxine Waters (CA-43) and others.

From the moment we walked in and were issued hotel room key cards plastered with candidate information, to the last bus ride from convention center back to the hotel – where one of our CA Peace Alliance volunteers talked peace with an Oakland foster care advocate – we connected with hundreds of people to build upon our history with the CDP.  The weekend was a potpourri of people, peacebuilding and policy. 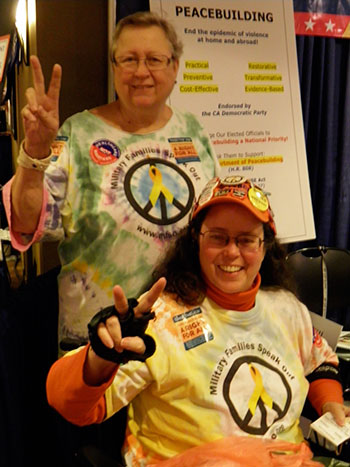 Policy matters.  It impacts our world and reflects our dreams and our nightmares.  Where we focus our resources – our time, our energy, our money – speaks to who we are and what we want to be as individuals, as a nation and as a world community.  Building peace includes prioritizing peace as a part of our public agenda.  Peace is personal and peace is policy.

Two years ago, the CA Peace Alliance achieved our long-time goal of infusing the CDP 2012 Platform with peacebuilding ideals.  Last summer, we succeeded in getting the CDP to endorse DoP legislation as one of its five pieces of endorsed federal legislation.  The DoP legislation calls for peacbuilding measures to address the cycle of violence both domestically and internationally.  In July 2013, the CDP also adopted our “Resolution in Support of Peacebuilding.”

That resolution acknowledges that “violence in America cuts across age, gender, sexual orientation, gender identity, disability, ethnicity, religion, and nationality, and negatively impacts the quality of life, erodes social values and standards of morality, deteriorates national morale, and creates a culture that systematically reproduces violence by the use of force and violence as means of defense and security domestically and internationally.”

In adopting CA Peace Alliance resolution, the CDP “encourages state and national legislatures to support research by government agencies and NGOs to identify and address the root causes of violence in our society, and supports the implementation of education and training programs in nonviolent conflict resolution in public agencies and in public schools and supports policy initiatives that will advance peacebuilding domestically and internationally on the local, state, and national level.”

Only days before the CDP convention, the Canadian Liberal Party adopted in its Platform a call for establishment of a governmental institution for peace, stating that Canada has a constitutional responsibility for “peace, order and good government … making the federal government’s pursuit of peace an obligation, not an option,” and elaborating that “peace can prevail and endure only if we create institutions dedicated to promoting a culture of peace and non-violence …”

Peace is an obligation of the government, not an option.  Peace can prevail and endure only if we create institutions dedicated to promoting a culture of peace and nonviolence.  That’s the message we took to the CDP 2014 Platform committee. 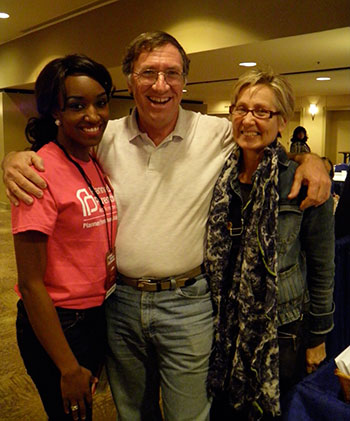 Our quest to permeate the CPD Platform with peace began in 2011 and 2012 when we succeeded in interspersing peacebuilding language throughout the CPD 2012 Platform.  In the fall of 2013, we submitted new language for the 2014 Platform and worked to retain our 2012 language in the new Platform. When the draft 2014 Platform was released in January, we began the process of submitting, advocating for and working with the Platform Committee on peacebuilding amendments to the World Peace and International Relations Plank.

We testified before the Platform Committee on the first day of the convention, and, throughout the weekend, we checked back to make sure our language was incorporated into the final version of the 2014 Platform.  (This involved some detective work to keep track of the individual who was finalizing the Platform document.)

While Platform Committee policy does not permit reference to specific legislation, such as the Department of Peacebuilding legislation, the committee accepted our language into the World Peace plank and the CDP as a whole voted to include our new 2014 Platform language, stating that the Party will:

In addition to the new World Peace Plank language, we resubmitted our peacebuilding language which was incorporated into 7 other planks of the 2012 CDP Platform, including the following planks:  Business and Economy, Children, Criminal Justice, Education, Energy, Agriculture and Food Safety, and Veterans and Military Families.

Examples of our retained language include: 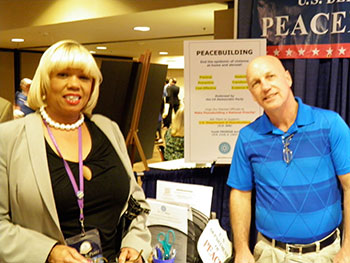 While we did not propose the following Anti-human Trafficking Plank and National Security Plank language, we supported it:

The delegates, the office holders, the candidates, the voters … they were all there, the people of the party, the party in the people.

A.  CONVENTION DELEGATES AND ATTENDEES

Many of the caucuses, their leadership and their members have partnered with us on strengthening peacebuilding policy within the CDP, including the African American caucus, the Progressive caucus, and the Rural caucus.  At this convention, we attended caucus meetings and/or hospitality suites with the following caucuses: African American, Arab American, Computer & Internet, Business & Professional, Disabilities, Environmental, Progressive, Rural, Women’s and Young Democrats.  We have also been in contact with others such as the Children’s caucus.

B.  CLOSE ENCOUNTERS OF THE CANDIDATE KIND

The candidates were everywhere. They lined up to speak at the caucus meeting.  They were in the general sessions, in the hallways, in the restaurants and restrooms, at the exhibitor booths, in the hotel lobby and in the elevators.  Nancy Pelosi, Jerry Brown, John Perez signs magically appeared at the general sessions amidst signs:  “Enact a Fracking Moratorium,” “Healthcare Not Warfare,” “Disclosure Political Funders Here,” “Support a U.S. Department of Peacebuilding.”  Candidates and their supporters hosted events, passed out buttons, stickers, candidate baseball cards, flyers, and cookies. We attended candidate hospitality events, including a party thrown by Mike McGuire (CA State Senate District 2 candidate).

But, most of all, current and future policymakers were accessible and open to listening to our concerns.  CA Peace Alliance volunteer and CDP Delegate Maggi Koren said, “I forgot about the oodles of networking we can do with friends, strangers, with those who are elected and those who are campaigning. I forgot that everybody is listening deeply because they want our vote especially since they know conventioneers will talk about them when they return home. The CDP Convention is always a work in progress and everyone is hoping that their project will be recognized.”  We were there to urge current and future policymakers to support establishment of a U.S. Department of Peacebuilding and to make peacebuilding a national priority.

We spoke with many current and prospective legislators to request their support or thank them for supporting HR 808, YPA and peacebuilding programs and policies, including many of the following:

We attended meetings and talked with people everywhere, including the elevators, the bus to convention center, the local Starbucks, the hotel roof top restaurant.  We went into the lobbies and we walked the lines of individuals waiting to get into events, such as one featuring Lt. Governor Gavin Newsom. There were some touching and inspiring moments:

At our booth – and as we fanned out into the convention – we reiterated the importance of peacebuilding.   Our  Gandhi/ Martin Luther King poster states, “One dream can change everything … U.S. Department of Peace[building]” and another poster says “Peace: It Takes a Village.”

We created a new “Peacebuilding” poster for the convention that calls for peacebuilding to end the epidemic of violence at home and abroad and elaborates that peacebuilding is practical, preventative, cost-effective, restorative, transformative and evidence-based.  “Peacebuilding is endorsed by the CA Democratic Party.  Urge our elected officials to make peacebuilding a national priority!  Ask them to Support:  the U.S. Department of Peacebuilding (H.R. 808) and the Youth PROMISE Act (H.R. 1318, S. 1307).”

We also connected with many on future collaborations and events.

Volunteers and our long-time peace messengers are the heart and soul of our peacebuilding journey.  Peace Alliance supporters traveled from throughout CA to participate in the convention.  Others who couldn’t travel contributed ideas, money, posters, postcards, banners, printing costs, supplies, transportation, lodging and moral support.  We thank our CA Peace Alliance Democratic Endorsement team, the convention volunteers and those who worked behind the scenes.

Thanks to all for peace-ing it together.