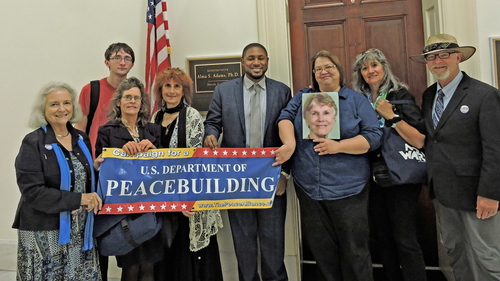 One student wrote to Congress that she hopes for a world
where we don’t have to fear and worry about how to hide students during a mass shooting.

Another said he hopes we can one day be a country
where no one is a victim of domestic violence.

During the week of International Day of Peace (9/21/18), Department of Peacebuilding (DoP/ HR 1111) advocates traveled to Washington, D.C. to make peacebuilding a national priority and to seek additional cosponsors for current DoP legislation.  We also urged support for the DoP Act of 2019, which will be introduced likely in February 2019.  We relayed messages of peacebuilding from students in CA and Washington, D.C.  (See Someday.  With Liberty & Justice for All – DC Advocacy Days, Part I and Then We Met Congress – DC Advocacy Days, Part II)

Against the backdrop of contentious hearings on the confirmation of Supreme Court nominee Brett Kavanaugh, DoP advocates visited legislators to promote multiple peace-related bills, delivered constituent letters, worked with others in the field to AMPLIFY requests for DoP cosponsors, followed up after Advocacy Days, and coordinated with other International Day of Peace actions:

From 09/01/18 — when we started publicizing Advocacy Days legislation recommendations — through 11/02/18 follow-up, 64 cosponsors added their names to our recommended bills, including at least 34 from our visit list.  Rep. Yvette Clarke (D-NY) and Rep. Marcia Fudge (D-OH) cospoonsored H.R. 1111 during this period.  The largest increase was in cosponsors of Condemning Violence Against Children Globally and the Violence Against Women Reauthorization Act.  Regarding several other bills, many on our visit list were already cosponsors.

International Day of Peace
In addition to congressional visits, we participated in:

By taking peacebuilding to Congress, we AMPLIFIED the call for prioritizing peace and violence prevention in this nation.  Peace needs a stronger voice in DC and a permanent seat at the table of our government.

To come together under the banner of peace
forces us to challenge all forms of injustice …
If advocating for peace, justice and humanity toward all human beings
is being radical, then I am proud to be called a radical …
– Congressman Ron Dellums (CA), 1935 – 2018

Seize the Day!
Scroll to top