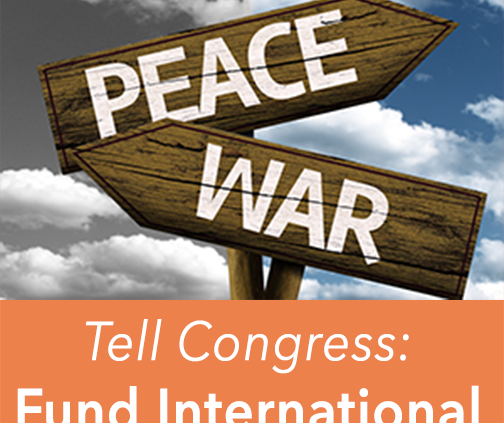 After 13 years, 2 wars and trillions in military spending, terrorist attacks are rising sharply

Friends, recently the Institute for Economics and Peace released a report on Terrorism. The Global Terrorism Index is a comprehensive study accounting for the direct and indirect impact of terrorism in 162 countries in terms of lives lost, injuries, property damage and the psychological after-effects of terrorism.

Our current global strategies are clearly not very effective in dealing with this challenge. It’s time for new approaches.

►Sign the Petition: Let’s tell Congress and the President to invest more in Peacebuilding.

Over the next week or two, Congress will be working on our budget. Important peacebuilding funding could be on the table, including:

Our federal budget totals some $3.5 trillion dollars each year while these three peacebuilding initiatives cost only $110 million combined. At just .003% of our budget they deserve our vocal support and the support of the US Congress.

Join us in signing our petition urging them to invest in peacebuilding initiatives.

You can read more about these three agencies below.

Conflict Stabilization Operations Bureau (CSO) – part of the State Department, It was created in 2011, and has had operations in 44 countries. CSO worked with local groups during Kenya’s elections in 2013 – where violence during the previous elections had resulted in over 1,300 deaths and more than 350,000 displaced persons. This time around, Kenyans did lose 20 citizens, but with CSO’s help in engaging a broad coalition of local stakeholders, the 2013 elections were otherwise largely peaceful.

Complex Crises Fund (CCF) – also still in its infancy, CCF is managed by the US Agency for International Development (USAID). CCF funds civilian solutions rather than military intervention in times when humanitarian and diplomatic assistance are needed to prevent escalating violence. For example, in Tunisia, after economic inequality, corruption, and political repression led to the ousting of President Zine el-Abidine Ben Ali, the CCF supported a peaceful transition process.  It also helped broaden and increase citizen participation in the new government, thereby reducing the risk of armed conflict.

Conflict Management and Mitigation Office (CMM) – founded in 2002, CMM works within USAID’s Bureau for Democracy, Conflict, and Humanitarian Assistance. Their “People-to-People Reconciliation Fund” brings together individuals of different ethnic, religious or political backgrounds from areas of civil conflict and war – creating opportunities for adversaries to resolve conflicts, reconcile differences, promote greater understanding and mutual trust, and work on common goals toward reducing conflict. CMM has supported over 135 peacebuilding projects in 35 countries and awarded over $115 million in grants for “people-to-people” reconciliation programs CMM has also trained over 500 U.S. Government and non-government partners in tools that ensure a peacebuilding approach in conflict-affected areas.

Newtown, An Anniversary
Scroll to top