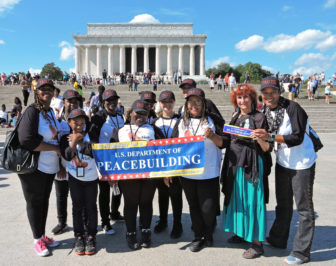 “As a child born during the horrific times of the Vietnam War in 1969, I am all too familiar with what it is like not to experience peace or freedom and live in an era of unrest!I lived in two different Vietnamese orphanages up until age 41/2 and at age 48, I am still physically and emotionally scarred by the devastation four decades later …” said Lan E. Jefferson, Founder of All In San Diego Advocacy Group.

Leading up to the Department of Peacebuilding Campaign’s Advocacy Days in Washington, DC, San Diego students and community leaders, and a student from Los Angeles wrote heartfelt letters to members of Congress imploring them to prioritize peace and establish a cabinet-level Department of Peacebuilding (DoP) now.  We delivered those messages to over one hundred Representatives and Senators in October.

Lan E. Jefferson, Founder of All In San Diego Advocacy Group, wrote that as a child in Vietnam she experienced the violence of war there and that as an adult is she is still scarred by that violence.  Some of the San Diego students wrote that they have never experienced peace.  “There has not been a definite world of peace for my generation … “ (Salome Montoya)  “Violence is part of our lives …” (Jahi)  One said, “Life without peace would not last.” (Nayely Mendoza)

II.  Peace Is A Right

In her letter urging Congress to create a U.S. Department of Peacebuilding, Lan Jefferson said we always have a choice to do the right thing.  “Peace is a right for everyone!  … When I think of the right to peace, it includes having the right to both physical and emotional peace … to physically be at peace with our country, our neighbors, and among ourselves, but also to be at a peaceful state of mind … In order to live peacefully among one another and help our country prioritize (ending terrorism, shutting down gang violence, establishing friendly borders, making peace a way of life, empowering peace as a state of mind, etc.), we have to be the ones to set the climate (tone, theme, agenda, etc.) for our country of wanting and needing to be a country of peace … “

IV.  About a Department of Peacebuilding – From High School Students

V.  About Peace and a DoP – From Concerned San Diego Citizens

VI.  About Peace and a DoP – From San Diego City Council President

San Diego City Council President Myrtle Cole wrote, “During this time of divisiveness and intolerance, it is important to work for a culture of nonviolence and inclusion.  We owe this to our children and ourselves … Please support the children of San Diego and young people throughout our national by cosponsoring Department of Peacebuilding legislation.”

VII.  Encouraging Congress to Do the Work of Peace – From Bishop McKinney

Bishop George McKinney, Ph.D., D.D. wrote, “I am sending this communication in support of the initiative to establish a United States Department of Peacebuilding. I have been in ministry for 70 years and have served as the Senior Pastor of St. Stephen’s Cathedral Church of God In Christ for 55 years this month.  I have had a lifelong personal commitment to peaceful living and peacebuilding. As an active member of the community in which I have lived for 58 years, I am often called upon during times of turmoil and distress to be a voice for reason and peace. It is such a rewarding work! I would like to encourage you and the other members of Congress to continue this work.”

“An official, Cabinet-level position of Secretary of the US Department of Peacebuilding will go a long way to create an environment that chooses peace over chaos, love over hate and friendship over enemies. We certainly applaud the individual efforts of the many Americans who have made a personal commitment to peace. However, I believe now is the time to do more. The world has always looked to the United States to provide leadership in this and other areas like it. We can definitely make a difference in the world when we work together,” he said.

VIII.  It Is Time

It is time to make peace and peacebuilding a national priority.  As one student wrote, “A US Department of Peacebuilding would assist in bringing humanity back to being human.” (Dalilah Nunez, 11th Grade)  Another said, “CONGRESS PLEASE STAY WOKE – LISTEN TO WHAT WE HAVE TO SAY” (Nicey G, 11th Grade)