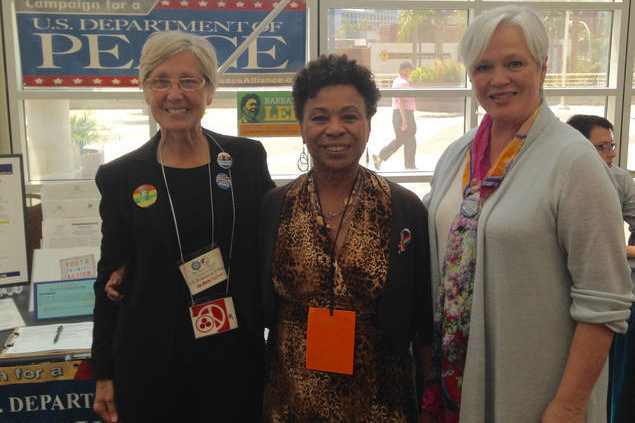 In the midst of government dysfunction, electioneering, national platform discussions, and continuing violence – including the unthinkable mass shooting murders in Orlando, FL – the CA Peace Alliance promoted facets of peacebuilding at the CA Democratic Party (CDP) statewide Executive Board meeting in Long Beach from 7/17/16 to 7/19/16. 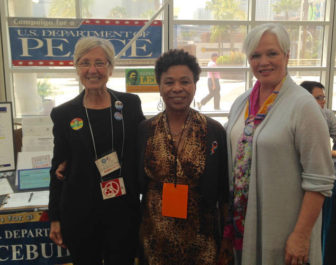 Peacebuilding has many facets.  At the Executive Board meeting, the CA Peace Alliance promoted legislation and resolutions relating to:  1) the U.S. Department of Peacebuilding Act of 2015 (HR 1111/ DoP); 2) the Youth PROMISE Act (HR 2197/ S 1770); 3) No to Juvenile Solitary Confinement/ Yes to Restorative Justice; and 4) CA Gun Safety legislation.

Peace takes a village.  It took a team to relay our peacebuilding messages from CA to DC.  Thank you to:

At the CDP Executive Board meeting, in addition to our “actions for peacebuilding,” the CA Peace Alliance group dialogued with attendees about facets of peacebuilding, the cornerstones of peace, election and platform issues and how to prioritize peacebuilding in this nation.

During the weekend of 7/17/16 to 7/19/16, CDP activists and leaders from throughout the state gathered to discuss issues, Party business, and candidates and to elect CA members of the Democratic National Committee (DNC).  The CA Peace Alliance/ Campaign for a U.S. Department of Peacebuilding attended its 17th consecutive CDP statewide meeting to lobby for peacebuilding.

At our booth, the discussions centered on our ‘facets-of-peacebuilding’ legislative actions.   (For details about those actions, see Section II.)  One booth visitor talked about starting movement to establish an international government for all countries to be a part of, with a condition of abolishing the military.  Another, who was a Bernie Sanders supporter, discussed unifying the Western states, especially the Bernie supporters and engaging them for the Peace Alliance.  One person said his focus was labor issues, supporting union workers, and anything related to that.  An Orange County individual from Military Families Speak Out stopped by to promote Lenore Albert for State Assembly in District 72.

Congresswoman Barbara Lee (CA-13) and Congresswoman Maxine Waters (CA-43), both of whom were running for Democratic National Committee (DNC) seats and won, stopped by our booth.  Congresswoman Lee left rainbow-colored stickers at our table and elsewhere.

Topics at the Caucus meeting included:

Throughout the weekend, Bernie Sanders supporters were a visible presence.  On Sunday morning, they demonstrated outside of the general session to ensure that messages from the Bernie presidential campaign were heard, including reform in how the Party nominates its presidential candidates.

The CDP, with the urging of both Bernie Sanders and Hillary Clinton supporters, unanimously approved a resolution urging the DNC to change the nominating rules for the 2020 presidential contest by eliminating state caucuses in favor of primaries and eliminating most super-delegates.  The issue of super-delegates, who are elected officials and party leaders who are not bound by elections results and support whomever they want, has been a major point of discontent in the 2016 Democratic presidential contest. The CDP resolution calls for Democratic governors and members of Congress to lose their status as voting super-delegates.  Members of the DNC would remain super-delegates, but would be required to vote for the candidate who won their constituency.

The CDP took positions on fall ballot measures.  It also passed resolutions relating to universal voter registration, diversity and transparency in hiring practices, clemency for non-violent marijuana offenders, support of a “Fair Hotels Program,” standing with the people of Flint, Michigan, protecting students and teachers from PCBs in public schools, tuition-free higher education, ending the blockade against Cuba, and thanking Senator Barbara Boxer for decades of public service.  It also passed resolutions relating to the Orlando/ Latino LGBT massacre and others.

Peacebuilding has many facets from creating a cabinet-level Department of Peacebuilding to advocating for legislation to curtail gun violence in this nation.  Thirty-three thousand American die as a result of guns every year.  We acted for peacebuilding by talking with attendees and collecting letters and petition signatures to CA and federal legislators, and following up with delivery of those letters to legislative offices in CA and Washington, DC.

See below for a summary of the legislation actions and follow-up.

A.  U.S. DEPARTMENT OF PEACEBUILDING

Federal legislation (HR 1111) will establish a cabinet-level Department of Peacebuilding to make peacebuilding a national organizing principle and to give peace an institutional platform in our government, utilizing and promoting best practices to prevent domestic and international violence.  This legislation is sponsored by Rep. Barbara Lee (D-CA-13).  It was endorsed by the CDP in 2013 & 2015.

Follow-up.  After the Executive Board meeting Nancy Merritt prepared letters to the 27 remaining CA Democratic members of Congress who do not yet cosponsor HR 1111.  Each of those letters was amplified with letter signatures on behalf of 14 CA Peace Alliance leads, and was accompanied by the signatures of 309 Californians (including 57 from the CDP Executive Board meeting in 6/16 and 252 from the CDP Convention in 2/16) – 8,721 AMPLIFIED signature messages!

Current status.  Shortly after the Executive Board meeting, Congressman Tony Cardenas (CA-29) signed on as a cosponsor.  As of 7/5/16, the bill has 39 cosponsors and the sponsor and 10 cosponsors are CA Democrats.

Federal legislation (HR 2197/ S 1770) addresses youth violence through Prison Reduction through Opportunity Mentoring Intervention Support and Education.  Violence reduction programs will be determined at the community level with input from stakeholders and programs will be measured for effectiveness and success.  HR 2197 is sponsored by Rep. Bobby Scott (D-VA-3) and S 1770 is sponsored by Senator Robert Casey, Jr. (D-PA).  This legislation was endorsed by the CDP in 2013.

Follow-up.  After the Executive Board meeting Jo Ann Gaines prepared and mailed letters to 12 CA Democratic members of Congress.  Each of the letters was signed on behalf of 16 CA Peace Alliance leads and was accompanied by 55 signatures CDP Executive Board – 660 AMPLIFIED signature messages!

Current status.  Shortly after the Executive Board meeting, Congressman Juan Vargas (CA-51) signed on as a cosponsor.  As of 7/5/16, the House bill has 53 cosponsors, including 15 CA Democrats.  The Senate bill has 4 cosponsors.

C.  NO TO JUVENILE SOLITARY CONFINEMENT/ YES TO RESTORATIVE JUSTICE

California AB 2590 calls for implementing Restorative Justice programs throughout the state and was authored by Shirley Weber (D-San Diego).  The legislation calls for moving CA’s criminal laws away from a system that relies solely upon incarceration and punishment in its treatment of offenders.  It changes the purpose of sentencing to “public safety” and encourages the Department of Corrections to provide opportunities for education and rehabilitation to all inmates, not just non-violent offenders and those with short sentences.

California SB 1143 addresses greatly restricting the use of Solitary Confinement for Juveniles and was authored by Mark Leno (D-San Francisco).  Studies show the that placement of incarcerated individuals in locked rooms or cells with minimal or no contact has potential psychiatric consequences including depression, anxiety, psychosis and potential suicides.

For details on follow up gun safety legislation, see Section E. below.

Current status.  On 6/30/16, the CA State legislature passed 11 gun safety bills and sent them to Governor Jerry Brown, who signed 5 into law and vetoed 6.  Of the 5 gun safety bills promoted by the CA Peace Alliance at the Executive Board meeting, the State legislature passed 5 and Governor Brown signed 3 of those into law (Senate Bills 880, 1235, 1446).  The Governor vetoed some bills as ‘premature’ and some of ideas from the vetoed bills are included in Lt. Governor Gavin Newsom’s upcoming ballot initiative.  Opponents of the laws signed by Governor Brown have filed paperwork to overturn the laws by ballot referendum, which may result in enough signatures to force a statewide vote either in the fall of 2016 or in 2018.

The November 2016 “Safety for All” initiative, of which CA Lt. Governor Newsom is the architect, calls for background checks, requires ammunition sellers to be licensed like firearms dealers and establishes a process to seize guns from people prohibited from owning them because of their criminal records, mandates that lost or stolen guns be reported to law enforcement and requires the state Justice Department to notify federal authorities when someone is added to the database of prohibited firearm owners.  (See www.sacbee.com/news/politics-government/capitol-alert/article74536792.html)

On the federal level, when House Majority Leader Paul Ryan (R-WI) refused to allow a vote on gun legislation on starting on 06/24/16 Democratic members of Congress staged a 26-hour sit-in demanding a vote.  Rep. Ryan adjourned Congress until after the July 4th holiday.  Over the recess, members of Congress throughout the country took their messages home.

Thank you to all who act for the many facets of peace.