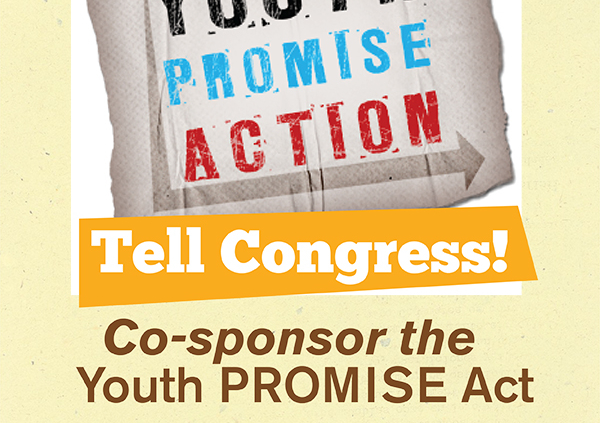 Some fantastic news to share today.  Key parts of the Youth PROMISE Act, along with Juvenile Justice and Delinquency Prevention Act, passed in the U.S. House of Representatives.

Read more about the bill passage in the press release from Congressman Bobby Scott’s office below.  The next step will be the U.S. Senate.  We will let you know more soon, but please take a moment to contact your senators about the youth PROMISE Act to get them ready for support.

Thank you all for the years now working with us in support of both the Youth PROMISE Act and the JJDPA.  We are making a difference!

The legislation also includes language based on Congressman Scott’s Youth PROMISE Act (H.R. 2197) that restructures JJDPA’s Local Delinquency Prevention Grants to encourage communities to plan and implement evidence-based prevention and intervention programs specifically designed to reduce juvenile delinquency and gang involvement.  Specifically, Title III of H.R. 5963 includes Youth Promise Incentive Grants to enable local communities to address the unmet needs of youth who are involved in, or are at risk of involvement in, juvenile delinquency or gang activity, through a continuum of delinquency prevention programs for juveniles who have had contact with the juvenile justice system or who are likely to have contact with the juvenile justice system.

“I am very pleased that the House has passed the Supporting Youth Opportunity and Preventing Delinquency Act that Congressman Curbelo and I introduced,” said Rep. Scott. “I commend Chairman John Kline, Representatives Susan Davis, Buddy Carter, Frederica Wilson and others for working with us to pass this long overdue reauthorization of the Juvenile Justice and Delinquency Prevention Act. This bill shows that Congress can move away from the tough on crime slogans and soundbites that have dominated crime policy for too long, and instead focus our efforts on evidence-based policies that will move at-risk children from a cradle-to-prison pipeline onto a cradle-to-college and -career pipeline.

“Our bill will incentivize evidence-based prevention and intervention initiatives at the federal level to reduce juvenile crime and delinquency and save taxpayers money,” continued Rep Scott. “The legislation also includes language modeled after my Youth PROMISE Act that will provide resources to empower local communities to develop comprehensive evidence-based prevention and intervention programs to reduce youth gang involvement and keep at-risk children on the right path. I hope that the United States Senate will act on this bipartisan legislation before the end of this session.”