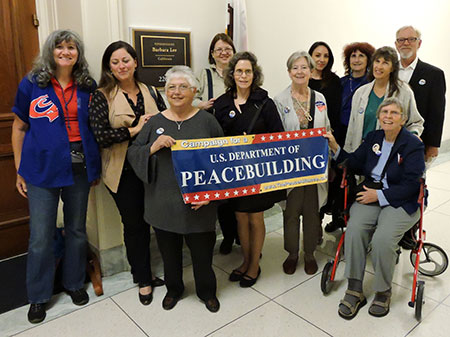 During 2015, we succeeded in both renewing the 2013 endorsement of the CA Democratic Party (CDP) of the DoP legislation, and also in gaining CDP adoption of a related UN resolution urging that body and all member nations to support infrastructures of peace within and among nations.  The New Mexico Department of Peacebuilding Initiative worked for passage of a bill to create a state Department of Peace.

To spread the word about peacebuilding, we attended marches; tabled and spoke at many events; organized workshops; wrote articles, literature and letters about peacebuilding; and attended town halls and other Congressional meetings, events and telephone conferences.

We took the DoP campaign to Congress, to the Pope, to Steven Colbert, to the CA Democratic Party, to the National Association of Community and Restorative Justice (NACRJ) conference in Fort Lauderdale, FL, to a county fair, to community groups, to students, and to others.  We connected with former DoP sponsor, Dennis Kucinich, and expanded our organizational endorser list, including gaining the endorsement of actor Sharon Stone.  We supported the National Peace Academy in its collaboration with George Mason University to create a ‘civilian Camp David’ to research, focus and train in violence prevention.

We held a break-out session at the October Peace Alliance national conference in Washington, DC, featuring former PA Executive Director Dot Maver.  We have expanded the work of the National Department of Peacebuilding Committee to include more dedicated advocates and look forward to what is created by the creativity, enthusiasm and work of this group of peacebuilders.

Peacebuilding is many steps and peace is every step.  Download the full .pdf report for more detail on the DoP campaign 2015 steps for peace – and/or to be more involved with our 2016 expanded steps for peace.