“Arise, then, women of this day! Arise all women who have hearts, whether our baptism be that of water or of tears!… We women of one country will be too tender of those of another country to allow our sons to be trained to injure theirs. From the bosom of the devastated earth a voice goes up with our own. It says “Disarm, Disarm! The sword of murder is not the balance of justice.” ~Julia Ward Howe, 1870
From her Mother’s Day Proclamation for Peace
(Full proclamation below)

Too few Americans are aware that early advocates of Mother’s Day in the United States originally envisioned it as a day of peace, to honor and support mothers who lost sons and husbands to the carnage of the Civil War. 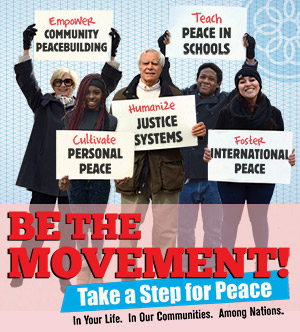 In 1870 — nearly 40 years before it became an official U.S. holiday in 1914 — social justice advocate Julia Ward Howe issued her inspired Mother’s Day Proclamation, which called upon mothers of all nationalities to band together to promote the “amicable settlement of international questions, the great and general interests of peace.” She envisioned a day of solemn council where women from all over the world could meet to discuss the means whereby to achieve world peace.

Julia Ward Howe was a prominent American abolitionist, feminist, poet, and the author of “The Battle Hymn of the Republic.” She nursed and tended the wounded during the civil war, and worked with the widows and orphans of soldiers on both sides of the war, realizing that the effects of the war go far beyond the killing of soldiers in battle. The devastation she witnessed during the civil war inspired her to call out for women to “rise up through the ashes and devastation,” urging a Mother’s Day dedicated to peace. Her advocacy continued as she saw war arise again in the world in the Franco-Prussian War.

While Mother’s Day has presently lost much of its early edge for justice, it’s important to note some of the underpinning intentions and re-commit ourselves to its prescient calling. At a time when our country is again engaged in devastating and costly wars abroad and many of our own communities are torn apart by violence, it’s time for Mother’s Day to return to its roots.

In the spirit of Ward Howe’s original call, this occasion can be a time to dedicate ourselves, on behalf of mothers, fathers, sisters and brothers everywhere, to rise up and protect our most vulnerable by calling for our leaders to make a directional shift in the course of our nation. There is no need more urgent than addressing the devastation brought on by violence in all of its forms – affecting the lives of untold millions in our nation and around the world. Then, we may finally see the carnage and devastation of violence and war fade into its own history. There could of course be no better way to honor our mothers.

“Arise, then… women of this day!
Arise, all women who have hearts,
whether our baptism be that of water or of tears!
Say firmly:
We will not have great questions decided by irrelevant agencies.
Our husbands shall not come to us, reeking with carnage,
for caresses and applause.
Our sons shall not be taken from us to unlearn
all that we have been able to teach them of charity, mercy and patience.
We, women of one country, will be too tender of those of another country
to allow our sons to be trained to injure theirs.

From the bosom of the devastated earth a voice goes up with our own.
It says:  Disarm, Disarm!
The sword of murder is not the balance of justice.
Blood does not wipe out dishonor,
nor violence vindicate possession.
As men have often forsaken the plough and the anvil
at the summons of war,
let women now leave all that may be left of home
for a great and earnest day of council.

Let them meet first, as women, to bewail and commemorate the dead.
Let them then solemnly take council with each other as to the means
whereby the great human family can live in peace,
each bearing after his own kind the sacred impress, not of Caesar,
but of God.

In the name of womanhood and of humanity, I earnestly ask
that a general congress of women, without limit of nationality,
may be appointed and held at some place deemed most convenient,
and at the earliest period consistent with its objects,
to promote the alliance of the different nationalities,
the amicable settlement of international questions,
the great and general interests of peace.“ 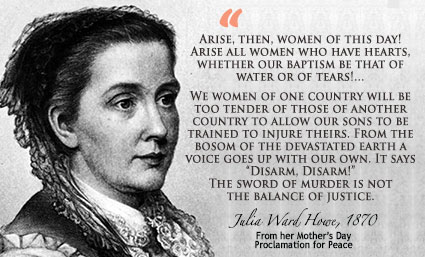 Be the Movement! National Conference in DC