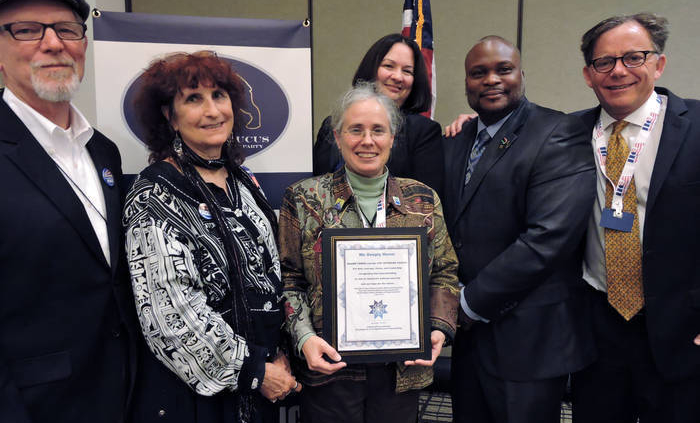 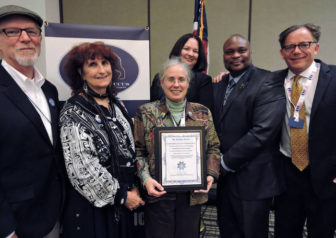 As attendees processed presidential and other election results at the CA Democratic Party Executive Board (CDP E-Board), the CA Democratic Party resolved to defend its many accomplishments in working conditions, climate, health care, immigration and protecting the rights of all Californians.  At the E-Board in San Diego, from 11/18-20/2016, the CA Peace Alliance advocated for peacebuilding and participated in standing committee and caucus meetings and dialogued with attendees.  The issues ranged from elections to sexual misconduct of law enforcement officers to climate to Standing Rock.

The CDP adopted several resolutions, including: 1) Support for the People of Standing Rock; 2) California Indian History Curricular Reform; 3) Support of Hotel Workers ‘Stand with Hotel Housekeepers’; 4) Opposing to Continued Use of the Internal Revenue Code Against Medical and Adult Use Marijuana Dispensaries and Providers; 5) Resolution Regarding Fraudulent Organic Products; 6) Celebrating the Life of Legislator and Activist Tom Hayden; 7) Opposing Any Defunding of Planned Parenthood or Overturning Roe v. Wade; and others.

The CDP adopted a resolution submitted by Jerilyn Stapleton, So. CA Peace Alliance State Coordinator and President of CA NOW, “Resolution for an Executive Order Directing the California Attorney General to Investigate, Manage, Interpret, Prosecute or Inquire About Matters Relating to Sexual Misconduct of Law Enforcement Officers.”  This calls upon the CA Attorney General to investigate alleged incidents of sexual misconduct by law enforcement officers to ensure that the laws of the State are being adequately enforced, with the Attorney General having all powers of a district attorney and providing a report on all cases where the Attorney General declines to prosecute on any charges.

The Party also adopted a resolution to defend California’s Accomplishments:

Whereas California Democrats have led the nation in raising wages and improving working conditions, confronting the existential threat of climate change, expanding health care for children and families, integrating all of our law-abiding immigrants into our communities without fear of separation from their families, and protecting the rights of all Californians; and

Whereas Donald Trump and the Republicans’ policies would increase inequality and cost America jobs, and his campaign emboldened bigotry and misogyny in our communities and our schools; and

Whereas Governor Jerry Brown stated that “we will protect the precious rights of our people and continue to confront the existential threat of our time – devastating climate change”; Senator-elect Kamala D. Harris stated that “we have the power to give a voice to the voiceless and advance an agenda rooted in justice and equality”; and California’s Legislative leaders stated that “we will lead the resistance to any effort that would shred our social fabric or our Constitution”;

Therefore be it resolved that the California Democratic Party join with Governor Brown and Democratic leaders in the Legislature and Congress to defend our accomplishments and the people of California from unjust and unconstitutional federal actions affecting our state.

In addition to discussing their own caucus topics and forums, the caucuses heard from various public officials including CDP Chair candidates Eric Bauman and Kimberly Ellis, CDP Secretary candidate Carolyn Fowler, and CA Gubernatorial Candidate Delaine Easton.  Tom Steyer, NextGen, spoke at many caucuses.  A member of the CA Association of Voting Officials (CAVO) requested the CDP to support Open Source software in voting machines rather than vendor-specific software which could be prone to manipulation and fraud.  Dave Jones, current CA Insurance Commissioner, attended, as did John Perez, who since the E-Board meeting announced his candidacy to fill the Congressional seat of Xavier Becerra.  Rep. Becerra is expected to fill the CA Attorney General position, which is now vacant due to Kamala Harris’ successful bid for the Senate seat which was held by Barbara Boxer.

Current CA Controller Betty Yee, speaking about the election, said, “Don’t despair.  Repair.”  Delaine Easton, who was State Superintendent of Public Instruction from 1995 to 2003, said she is running for governor because she wants people in Sacramento who are going to put the children first again.  “Children are a living message to a time we won’t see,” she said.  Current State Senator Mike McGuire (2nd District) said there are more veterans in CA than anywhere and that 25% of veterans are homeless.  He talked about efforts in Mendocino County (in his Senate District), to secure funding for permanent housing and the No Place Like Home Initiative.

Children’s caucus.  Brian Gibbs (San Diego DoP) spoke at the Children’s caucus about our peacebuilding actions at the Executive Board and San Diego’s Kids for Peace initiatives.

Native American caucus.  The caucus discussed events at the Standing Rock Sioux reservation, and polling places on the Morongo Reservation in Southern CA, the election of Native American women in MN, and other matters.  The CDP adopted a resolution in support of the people of Standing Rock Reservation, which provided, in part that the Dakota Access Pipeline, carrying over half a million barrels of dirty crude oil, was slated to pass through tribal lands, not only desecrating the ancestral burial grounds of the Standing Rock Sioux, but bringing potential harm to their main source of drinking water. “The transport of heavy crude is particularly volatile, leading to 18.4 million gallons of oils and chemicals spilled, leaked or released into the air, land and waterways between 2006 and 2014 in North Dakota alone, causing death, contamination of soil and water, and all kinds of disease …”  It was resolved that the CDP stands with the Standing Rock Sioux and calls for the Federal Government to make permanent a moratorium on construction of the Dakota Access Pipeline on and near Standing Rock.

Veterans caucus.  In addition to the CA Peace Alliance presenting a certificate of honor to this caucus for “its courage, vision and leadership,  recognizing that peacebuilding is vital to America’s national security and our hope for the future,” the caucus discussed legislation and such topics as “Honorably Discharged Dishonorably Deported” veterans of the American military and efforts to help all veterans who were honorably discharged to achieve the right of U.S. citizenship.  (See www.deportedvets.org)

Progressive caucus.  The Progressive caucus meeting turnout was so large it expanded to additional room space to accommodate many Bernie Sanders supporters and others.  Chair Mike Thaller announced that as of the time of the caucus meeting, the CDP had agreed to a request by the CDP Environmental caucus to stop taking money from Big Oil.   There was a panel discussion on “What Is to Be Done?” with Alan Minsky, Nina Turner and Alexandra Rojas.  There was also an “Election Integrity Report” on taking back the vote with Mimi Kennedy and Jim Soper.

Alexandra Rojas, “Brand New Congress,” discussed that groups plan to run 400+ non-politician candidates for Congress in 2018, “extraordinary Americans to challenge both Democrats and Republicans in congressional primary races across the country.”  Every candidate will be a firm believer in the Brand New Congress platform. Among its ideals are getting money out of politics, reforming the electoral system, refocusing the criminal justice system on reducing the incarcerated, saying “no to wars of choice” and more. (See www.brandnewcongress.org)

The Brownie Mary Democratic Club was there to thank the CDP for support its support and role in the legalization of recreational marijuana.  When a club member said you couldn’t get much lower on the political totem pole than marijuana, I said that peacebuilding may be lower.

A gentleman who works for the Department of Defense (DoD) stopped by our booth and suggested turning DoD into a DoP.  One Rotary Club member told us about their Peace Pole project.  Nuri Ronaghy and Alan Shorb, from the Women’s International League for Peace and Freedom and Department of Peace, traveled from Ojai, CA to connect with us.